I’m back on word target! In fact, I’m just a little bit over target, which makes work less stressful. Gore, rain, horror and rape (in much less quantities than the former three) have swallowed my novel. I’m not sure if I should be concerned that in everything I write there is always one character who gets raped, is raped ‘off screen’ or has been raped in their past. But, as Holly Black said, “You will look up things on the internet that make you look like a serial killer.”

Want a gorgeous piece of music? Good, cause I’m throwing it at you now: Dearly Beloved by Kyle Landry.

Today rain poured over the British countryside. As it happened, I got caught walking home in it. Usually, I hide under my panda hat and ‘assassin’s creed’ hood, but today I realised that I haven’t wandered in the rain without a care for my appearance since I was young. As I didn’t have anyone to meet or anywhere to be, I thus tugged off my panda hat, hood and glasses and enjoyed walking through the bleak fields beyond my hometown.

The rain was unexpectedly warm today, and considering that it’s winter, it was a pleasant surprise. I absorbed the feeling of the rain and talked to myself as I walked, trying to describe out loud how it felt. I ended up drenched and my mother thought I had just stepped out the shower when she came to visit, not long after I returned home! It was good to recall a fresh sense of what it feels like to get plastered in rain water, especially as it keeps happening to Frederick and Li-ling.

I found this picture on Deviant Art the other day, created by one of my favourite artists on the site, Vyrhelle. I love her stuff, nomnomnom. As soon as I saw it, I laughed. Then stared at it for a good ten minutes. This picture is definitely of Mercury, Frederick and Li-ling, in my head. Mercury gets to show his wings this time, not Frederick! 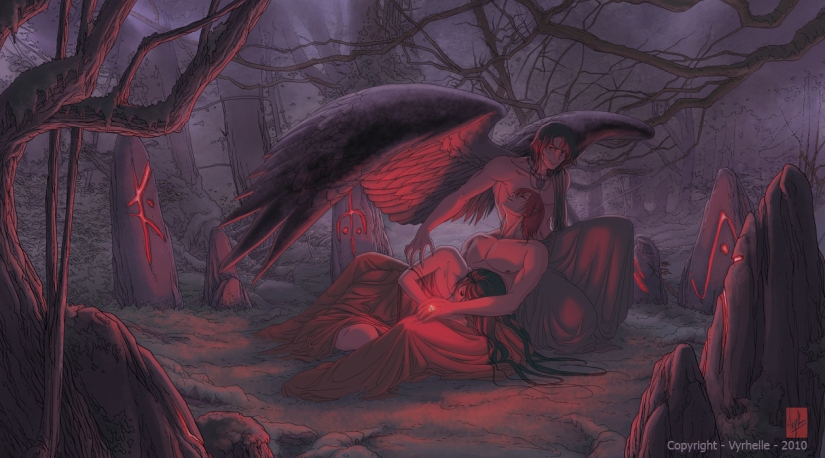 This evening my writing adventures have flown onto the page. I’m quite an action person, I love pace and suspense in my work. For a while I have been dreading an upcoming section of my novel, because I could only see it as a montage and of events that aren’t action-based enough to keep me entertained. But, I’ve been investing time in tormenting poor Li-ling to the point that I’ve set up enough conflict to work my way through the calmer, lovey-dovey section of my story.

I’ve also had to research into Latin tonight. That was fun. I love Latin, and again, I always find a way to incorporate it into my stories. This time it wasn’t planned. I had written myself into quite a dilemma and there was nothing Li-ling could do to defend herself, when I realised, ‘oh! a Latin incantation! Why the heck not?’ Did you know, the phrase for creating an unnecessary or overly pretentious word by stealing and mixing other languages together (by an English speaker) is known as an “inkhorn term”? You do now.

“Wait,” Frederick cried too late as Li-ling slapped the talisman onto Betty’s forehead. Flames flourished across Betty’s face and an ululating screech arose. Li-ling grabbed his arm and tugged the bolts back on the door. They threw the door open and Frederick shoved her out first into the rain. With only a slight moment of deliberation, they hurled themselves against the wall of the next building along, pressed flat against it as an almighty explosion forced through the antique windows. Frederick turned his head away, fire and splintered glass roaring through the air beside them.

Li-ling seized his shoulder and tugged him down to the floor next to her. Regardless of the puddles, Frederick pressed right down, grit covering his arms, half draped over Li-ling. Glass and wood thundered into the brick wall opposite the antique shop and bounced back over the pair on the floor. His arms and back stung as bits of debris flecked against his body.

A hollow tinkling sounded as the last fragments of the antique shop fell to the cobbled street.

Keen to research her discovery, Li-ling scoured the next page for their names, her finger whizzing over the sentences; trying to absorb the introductory paragraph as quick as possible.

Li-ling glanced at the lamp, and then drew the covers tighter to her waist. She carried on reading. A chill trickled over the bed sheets and sent shivers beneath her skin. Determined not to show any sign of recognition however, Li-ling pretended to keep reading. A shuddering breath left her mouth and misted through the air.

Her lampshade went out.

The clouded night bore no slot for moonlight to creep through. She didn’t want to look up. Quivering, Li-ling continued to stare at the invisible book. Her blood was racing again and she wished her heart would not beat so loud. She struggled to hear her own breathing over the strength with which it hit against her ribcage.

“Last night as I slumbered I ‘ad a strange dream…”

Unwilling to the last second, Li-ling slid her gaze across the bed.

“One that seemed to bring distant friends near.”

Peering up at last, a male face with wide unseeing eyes glowed grey on the surface of her wall. It stared at her as if livid.

The head shot across the room and blood splattered across her floor in a messy trail. There was a slithering, crackling sound, like centipedes crawling over one another; like tiny bones crunching.

“I dreamt of the faces of people I loved…”

Li-ling’s breath wooshed out of her as the end of her duvet rose and a round lump travelled towards her. Her sheets stained a dark red the further up the bed it slipped and Li-ling wanted to scream. Instead, she threw the book down on the lump. It did not flatten it; rather, it pushed the head further up her mattress and, screaming at last, Li-ling tripped out of bed.

She fell into the blood on the floor and her face contorted with repulsion, her entire body racked with shakes at the sight of it on her hands. She could feel it soak into her clothes and around her breasts. A longer scream escaped her.

Something grabbed her leg and she kicked, clawing at the floor. There was no breaking free. Li-ling twisted back to see a pale hand from under the bed wrapped around her ankle. A savage face stared out from the shadows, his other arm bent at an awkward angle.

“GET OFF!” she screamed.

“You didn’t lock the door,” he whispered.

8 thoughts on “NaNoWriMo Days a Blur and mysterious characters are so mysterious we’re running blind.”