Meet Japan’s plus-size model: Naomi Watanabe. She looks like the first person you should take to a party and the one person who’d maybe cheer you up during the apocalypse. Her mission: to break Japanese stereotypes about women being slim and demure.

In fact, she’s done a hell of a lot. Not only is she a model but also a comedian, best known for her Beyoncé impressions (also know as the “Beyoncé of Japan”), she’s a cast member on Japan’s “SNL,” was named one of Vogue Japan’s “women of the year 2016,” and is a judge on X Factor Japan. Finally, she has the most followers on instagram in all of Japan. 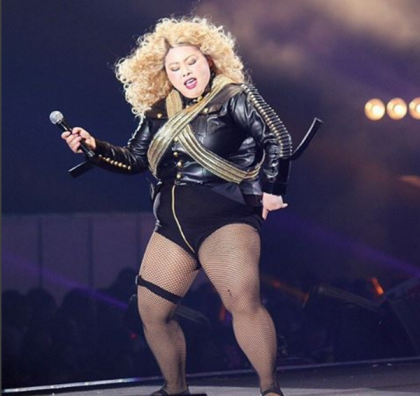 But that’s not enough. No. Watanabe has her own clothing line called “Punyus,” which means “chubby” in Japanese.

I’M STILL NOT DONE. She’s also been in an official music collab with Pentatonix. Just for the record: I adore Pentatonix, holy banana peel. She cracks me up.

To top it all off, Watanabe has made a Ghostbusters music video. This lady is on fire and flaming hot.

If you’re in need of cheering up this weekend, I highly recommend checking out her instagram. She looks like so much fun and has certainly brought a smile to my evening.