Last November, I related my bubbling and excitable story that StoryShop was the perfect tool for writers. I likened it to having a private Wikia. A perfect place to plan your novel, D&D campaign, anthology, the next epic fantasy with 500 characters… Visually beautiful and easy to navigate. A notebook that made sense and had clear links to other profiles.

Look at what it was:

And now… First of all, it’s created some confusing tabs that don’t make much sense, or don’t do much? It’s also created “books” for me and the “world” options don’t go anywhere.

It’s taken away the beautiful folders for character profiles, world notes, and the additional writing space (if you wanted that), and given you this:

This is now the entirety of StoryShop. The tabs on the left and right contain your character profiles and notes. That would be fine if it actually displayed them usefully. Oh no. This is what you get if you click on a character:

Your previously proportioned images are crammed into a cinematic video…slideshow…thing? So instantly, it’s ugly, and UNHELPFUL ANYWAY because it’s OVER THE TOP OF THE DOCUMENT YOU’RE SUPPOSED TO WRITE INTO. But it gets better: 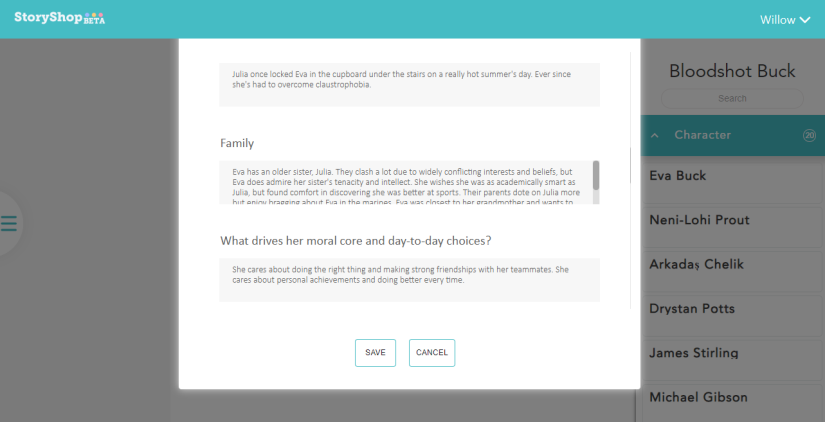 All your notes are crammed into scrollbars within scrollbars.

StoryShop advertised itself as a tool to write stories better. A place to plan characters and worldbuilding. That’s why it appealed. It was a portable notebook.

Now? It’s trying to be…I don’t even know what. A Word document online? But inferior because it doesn’t have keyboard commands, Track Changes, or the ability to flick open your notes as you write—which is hilarious, given how ‘intuitive’ this update is supposed to be.

So, fine. I’m gutted I invested in a lifetime subscription now that I’m subscribed to something I didn’t want or need?

Let me introduce you to Pocket Campaign

I’ve found an app that gives back my beautiful character profile shots and allows for snappy navigation and ample description. Pocket Campaign. Sadly, it is only available for Android devices (sorry Apple people), but it is lovely.

Just like StoryShop, you get your “world” options, but Pocket Campaign calls them “campaign decks.”

Just like StoryShop, you can share those Decks with other contributors and give them different permissions ranging from ‘read only’ to ‘full editorial’.

Now, here’s the thing that StoryShop has abandoned: proper profiles. Pocket Campaign calls them ‘cards,’ which I think is quite kitsch. With these cards, you can create character profiles and places, and that’s not the best part.

It automatically adds links to other existing cards, so long as the name matches the name of the other card. AND, if you’re using it for something like D&D, you can add secret notes so that when you share the Deck with someone, you can opt out of letting them see secret notes.

Now, it doesn’t have heading options, but that can be fixed with caps-lock, am I right?

FINAL REASON WHY I’M DITCHING STORYSHOP FOR POCKET CAMPAIGN
StoryShop has spent so long developing this awful update when it could have been developing its long demanded app companion. Pocket Campaign really actually is all of my worldbuilding at my fingertips, any place, any time.

I don’t need to be connected to the internet and everything is perfectly laid out in an app—not a badly formatted phone browser.

I’m tired of waiting for StoryShop to do something useful, so I’ve found something better, and now, I hope you have too.

Whooo! My second #Nighthaunt model painted. 👻
I finally did...one. Of 100.
I've been drawing our D&D characters lately. Here is Tatiana Sethu, demon hunter who can teleport into the middle of a fight and cause explosive force damage when she reappears.
A magical pen for magical purposes...
A New Year's Day so far.
Also. Work is just SO BUSY LATELY WOW (not) that I spent 2 hours doodling the #DnD PCs. When you get put on the Test and Trace desk without any other tasks to do and no computer, you can't even pretend to be working.
Homemade, veggie shepherd's pie with sweet potato mash 😋 Lecker.
Sometimes you just want to take a pretty picture of the clouds.
Loading Comments...
Comment
×
%d bloggers like this: