As a writer who, currently, can barely afford her weekly groceries, let alone go jetting off around the world to gain first-hand experiences, I must settle for a lot of research. For years, Japan has been a great source of fascination for me. It’s so different from the world I live in. Its cultural beliefs, history, societal norms, shopping trends, religion, myths – it’s like diving into a fantasy world from a novel, expect it exists; the Japanese have awful struggles and incredible achievements.

I thought I would share insights into some of the research I’ve done for my writing, and also just my general interest. Basically, I want to talk about Shintō, because I loved learning about it.

Shintō is the indigenous religion of Japan. It is perhaps the most optimistic religion you’ll find. No one can tell you how old it is or how it developed. There is no holy messiah, there are no scriptures, sutras, fixed dogmas – Shintō doesn’t even have propaganda or preachers – but it is rooted within the Japanese people and their traditions. To understand the Japanese, you should understand Shintō, because it remains closely connected with Japanese social values, shaping their ways of thinking and acting.

Shintō means “the way of the kami“, otherwise known as “spirits” or “gods”. Encyclopedia Britannica reports that 72% of the population affiliate themselves with Shintō and 66% affiliated themselves with Buddhism, the footnote stating that many practise both. 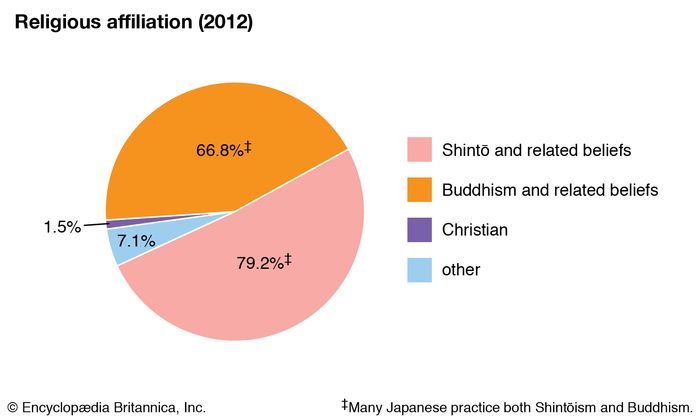 I say it’s an optimistic religion because Shintō believes that humans are fundamentally good, and evil is caused by evil spirits. As a result, many Shintō rituals focus on repelling evil spirits, purification, and making prayers or offerings to kami.

“Shintō gods” are called kami. They are sacred spirits that inhabit everyday objects as well as natural elements such as the wind and rain; the mountains and seas; trees and rivers; the sun, the moon, and the stars. When important people die they, too, can become kami and, in some cases, they are revered by their family.

Yaoyorozu no kami or “eight million gods” is one concept of Shintō, which is that an almost infinite number of places and items can house a kami. It can help Westerners understand people like Mari Kondo and her methods, who says you should thank each object for bringing joy or serving its purpose before throwing it away.

The Jinja Honcho Association says, “The ancient Japanese never divided spiritual and material existence, but considered that both were inseparable, seeing everything in a spiritual sense. In other words, they did not draw a border between a certain object and the work of that object.”

The Japanese, in a general sense, respect their belongings because almost everything has a kami, a little life-force worthy of dignity. A god could be living in your microwave or a grain of rice.

“As I reflected on the nature of these relationships, it occurred to me that Japanese people have treated material things with special care since ancient times. The concept of yaoyorozu no kami, literally, ‘8,000,000 gods,’ is an example. The Japanese believed that gods resided not only in natural phenomena such as the sea and the land but also in the cooking stove and even in each individual grain of rice, and therefore they treated all of them with reverence.” — Marie Kondo, Spark Joy: An Illustrated Master Class on the Art of Organizing and Tidying Up

Shintō rituals are performed by Shintō priests who often live on the shrine grounds. Japan Guide says, “Men and women can become priests, and they are allowed to marry and have children. Priests are aided by younger women (miko) during rituals and shrine tasks. Miko wear white kimono, must be unmarried, and are often the priests’ daughters.”

Shrine architecture is significant to Shintō art and the priests themselves are like guardians of ancient art forms such as Noh theatre, calligraphy, and court music (called gagaku) originating in the courts of Tang China (618 – 907). But more on that another time.

Before Buddhism, Japan Guide says that, in the Meiji period, “Shinto was made Japan’s state religion. Shinto priests became state officials, important shrines receive governmental funding, Japan’s creation myths were used to foster a national identity with the Emperor at its center, and efforts were made to separate and emancipate Shinto from Buddhism. After World War II, Shinto and the state were separated.”

When Buddhism was introduced in the 6th century, the two religions clashed. But not in swathes of bloodshed, oh no. The Soga, one of Japan’s top-dog clans at this time, wanted to embrace the new religion, but their rival clans opposed it. War never broke out, but both sides used psychological tactics to discredit each other, like blaming an epidemic on a newly installed Buddhist statue.

“This cold war,” says Culture Trip, “continued for almost 50 years until Japan’s new ruler, Empress Suiko, converted to Buddhism. The two faiths have since become entwined and have functioned side by side very peacefully, while also retaining their individual titles and traditions.” This sweeps over years of resistance and struggle between the two religions, but ultimately, yes, they coincide together very happily.

Now, earlier I said that Shintō has no propaganda or preachers. This is true of the modern era. Throughout history, its existence has been handed down and shaped to specific regions and village-to-village, but there was an era when Shintō was used for political gain. During Japan’s rapid modernisation, an initiative was launched called the ‘Great Promulgation Campaign’ in 1870 to persuade people of the new vision for Japan.

“Buddhist and Shintō priests were sent out across the land as peripatetic political agents,” says Christopher Harding, “spreading Three Great Teachings: respect for the gods and love of country; principles of Heaven and the Way of Man; and reverence and obedience to the Emperor and court. By 1876, a total of more than 10,000 ‘evangelists’ had been signed up to share a message that in practice boiled down to three more prosaic points: pay your taxes, send your children to school and comply with military conscription. At the same time, Japan’s numerous Shintō shrines were united in a single national framework, ranked in order of importance with the Ise Grand Shrine at the top – with whose rites everyone else had to harmonize theirs. This was also to be a means of reaching the population with whatever religious or political messages their new rulers sought to send.” (Japan Story, 2019, page 43)

Unfortunately, this campaign was not well received. One group of samurai become so enraged that they travelled to the Great Teaching Institute and tried to burn it down (Japan Story, 2019, page 43). When it seemed apparent that this religious method of shaping the population’s mindset wasn’t going to cut it, Japan looked at and adopted the Western model of controlling mass opinion through newspapers instead.

If you’ve ever watched a Japanese film, whether it be Ghibli or directed by Hirokazu Koreeda, you may have noticed a shot of the family alter or a scene involving a trip to a special shrine. People still seek support from Shintō by praying at home or by visiting shrines. It seems like talismans are coming out the ears; did you need one for a safe journey, good health, business success, childbirth, exams, or falling in love? Then, baby, Japan has got something to help you through. I love it!

I haven’t explained any of Shintō’s religious stories, which shape its morals and define its lore. The stories are (if I’m honest) confusing and baffling. I don’t want to boil them down, because I think that will demean their meaning – read more in the next section below. But I do want to say that Shintō considers death to be a terrible source of impurity. This is why, in modern-day Japan, you might see a Shintō wedding but a Buddhist funeral.

These religious practices are so deeply rooted in Japanese people, that even the non-religious continue to observe and participate. It’s like asking me why I celebrate Christmas if I’m not a Christian. I just do. It’s part of the family tradition. It’s nice to observe and be part of the day. It’s part of my society. The event is ingrained, even if the religion is not.

I mentioned that Shintō has confusing origin stories. For those of us who have never grown up with these stories, they are…very strange and there are a lot of characters. However! I have a great recommendation for the curious.

The Goddess Chronicle by Natsuo Kirino is a retelling of the myth that tells of Japan’s creation. It seems to give Shintō priestesses a voice as well as the goddess Izanami, who vents her rage at the rules that confine and condemn both herself and her priestesses. This story also partly explains why Shintō sees death as impure.

At the heart of Kirino’s tale is a retelling of the relationship between Izanami, the Goddess of Creation, and her husband Izanaki. Churning the empty seas with a spear, Izanami and Izanaki created the islands of Japan from the water dripping off the blade’s tip. To consummate their union, they circled a massive pillar, each walking in opposite directions to meet up on the other side. Rounding the pillar, Izanami saw her husband and greeted him. When their children were born deformed and had to be put in a boat and floated out to sea, they asked the higher gods what they had done wrong. They were told that it was because Izanami, the female, should not have been the one to speak first when they met at the pillar.

This is only part of the story, a seed of Shintō mythology that shapes the entire journey for the protagonist. I very much enjoyed this retelling. Not only is it accessible to anyone who doesn’t know much about Japanese mythology, but it’s also well-written and compelling.